The Emerald Ash Borer is a type of beetle that is native to Asia and Eastern Russia but has recently begun to spread around the United States. Accidentally brought in from overseas shipments the Emerald Ash Borer (EAB) was first discovered in Michigan in 2002. These beetles infest Ash Trees and lay their eggs in the barks cracks and crevices. Once the eggs hatch the larvae chew through the bark to the center of the tree where they live creating feeding galleries. These galleries interrupt the natural flow of nutrients and water that sustain the life of the tree. Eventually the adult EAB’s will emerge from the tree by chewing their way out and leaving small D shaped holes in the bark. 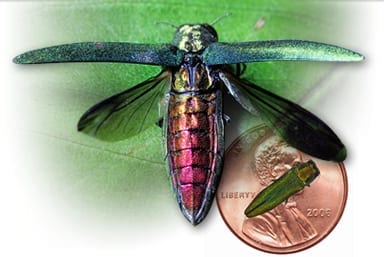 KNOW WHAT TO LOOK FOR! The Emerald Ash Borer – Smaller than a penny with a red body under it’s wings.

Often times a tree has been infested for several years before the infestation is noticed. At that point it is usually too late to save the tree. Some signs that a tree has an Emerald Ash Borer infestation include,

Take a look at the pictures below for examples of the damage the Emerald Ash Borer can cause. 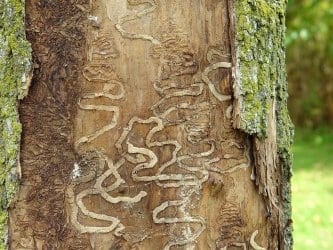 This shows what the feeding galleries of the larvae look like. You can see these underneath the bark of the tree. 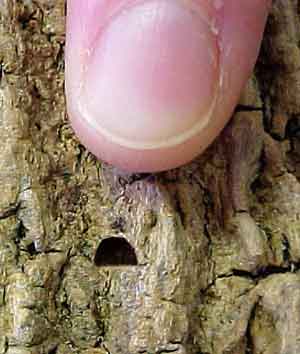 This is an exit hole. Once the larvae has matured the EAB’s chew their way out of the bark leaving behind small D shaped holes. 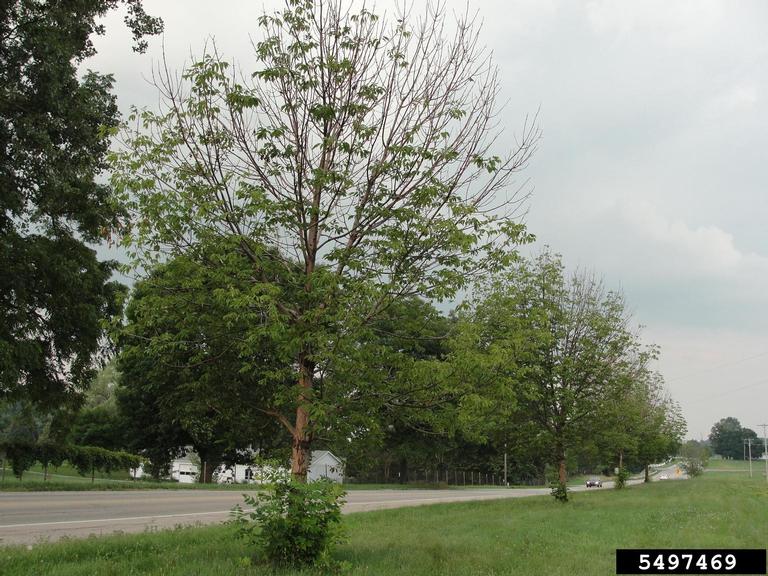 You an see the canopy dieback as well as the water sprouts at the base of this tree.

The Emerald Ash Borer is a real threat. They are active in our area. Hundreds of trees in Hammond and Munster have been effected and cut down because of this issue. If you see signs of damage on your trees, or if you see the culprit itself, it is asked that you contact the Indiana Department of Natural Resources IMMEDIATELY. 317.232.4120

If you have questions about the Emerald Ash Borer or need help with identification please contact Rapid Pest Solutions.

Because Timing Is Everything.