Who Scares You More?

October begins my favorite time of year. The crisp weather, beautiful colors, and scent of fall bring a smile to my face. And of course, there is Halloween – my very favorite holiday! Lots of bugs and other creepy crawlies are associated with Halloween and part of the fun of Halloween is the scary movies that you watch, curled up in the dark. Let’s bring these two things together in what I like to call

“Who Scares You More?” 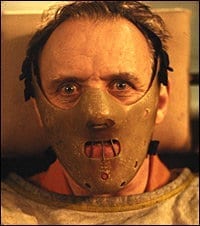 On the surface, you may think Hannibal Lecter wins scariest of these two hands down. But hold on, let’s take a closer look. Sure Hannibal is intimidating and smart, and he wants to eat you. So, yeah, those are pretty scary qualities, but spiders are really intimidating, too, especially big ones. They may not want to eat you but they can definitely bite you. Spiders also have that sticky web that you can never get off of you if you happen to walk into one. Hannibal will literally bite a piece of your face right off.

Hannibal wins scariest on this one.

Shark from Jaws – vs – Rats

Here we have a horror villain that you will only encounter in the ocean.  Rats can be found in every 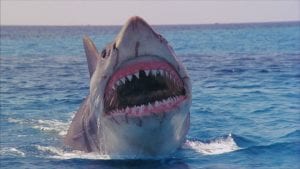 major city in the U.S. Your odds of encountering a rat are much greater than a shark. Although there are stories of rats nibbling on live people as they slept, I don’t find that to be a big concern of mine. In the ocean though, sharks are a concern. And if one attacks you it won’t be just a nibble.

The shark is scarier. 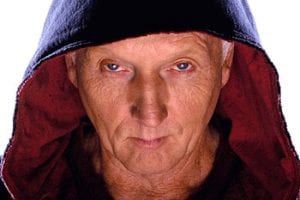 Jigsaw forces his victims to play games in order to escape harm. The games are both mentally and physically challenging. Roaches can invade your space, only coming out in the dark, hiding in cracks and corners; that right there sounds like a horror villain. I think that it is possible to solve one of Jigsaw’s puzzle and make your escape. There is no escape from creepy roaches that come out while you’re sleeping and contaminate every single thing they come in contact with.

Roaches are much scarier!

Well, this one is a dilemma, isn’t it? Cujo is a sweet, cuddly St. Bernard who gets bitten by a bat. 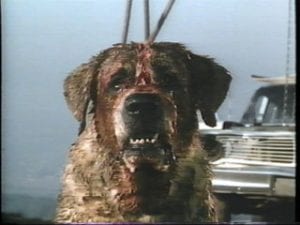 The dog contracts rabies and it turns him into a murderous beast. Now, most people would say that a large dog that can maul and kill you is scarier than anything, but the fact that the bat is the one that gave the dog rabies makes me feel that he is much scarier.

Bats are scarier. (at least rabid ones are)

What are your opinions on who is scarier? What would your tiebreaker be?

If you find yourself up against any of these pests give Rapid a call, we can help. Unfortunately, we can’t do anything about the horror monsters.

Because Timing Is Everything!